If you don’t have the time to read Alyn Smith’s amazing answer to the SNP NEC election results in today’s National, we’ve cut it down to 10 seconds for you.

If you’re in no hurry, read on.

It has been literally days since Smith declared himself a humble “TeamSNP” member whose sole aim was to “play for the shirt”. He even gritted his impressive teeth for a moment and tried to congratulate his successor as Policy Development Convener.

We can safely say that this charade is over. 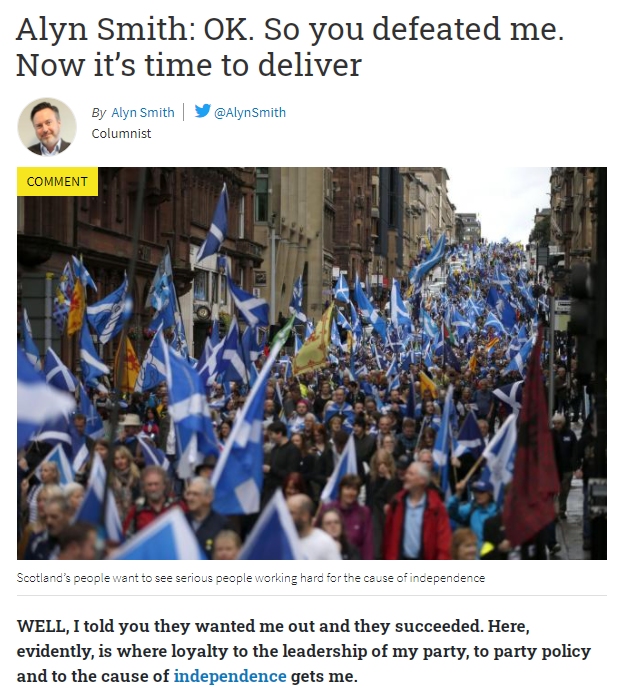 With our conscientious fairness, we will find that Smith likely did not write the headline. Even so, it is an accurate summary of the tantrum “Me, Me, Me” in the first paragraph and the entire column.

We honestly thought he was trying to find a mature, morally high-profile approach closer to the second tweet above, with a few subtle twists and turns, but as we noticed yesterday, the egos of the transgender cult of the SNP are so big and so battered by the outcome of the election that they can’t even muster the self-control to fake a dignified response.

Instead, there have been a host of outraged claims, of which Smiths is just the most unknown of many. While public interest in such political bubble spats is minimal, they actually determine the direction that the entire country will be pushed in the months and years to come. So it pays to think a little about why Smith and his allies are so angry.

That “somehow” is a pleasure. Smith is indisputably part of the preferred and privileged bourgeois elite of the SNP. He was parachuted to the Stirling constituency and a contemporary local candidate was sacked in very shady circumstances to make way for him after losing his MEP job on Brexit.

(Incidentally, we are told that although Smith promised to move to the constituency when he was elected, he is still living in Edinburgh almost a year later. We are happy to correct this information if we have been misinformed.)

The idea that it was booted as some sort of general coronavirus-based protest against authority is as weird as the line about people voting from their couches is pissed off. It’s not YOUR fault they had to vote from their couches and they paid £ 32 for the privilege.

It would be unusual (if not impossible) for everyone who has signed up for a three-day conference to show up and vote on every resolution every day, especially when the resolutions are as weak and empty as they are for the SNP members in this one Year were submitted. But even if people only registered for the NEC election (the only significant votes in the entire event), what now? They are allowed to do so if they consider this to be the most important topic.

It is indeed an undemocratic scandal that only conference attendees can vote for the NEC. Why shouldn’t all members vote on the key committee that controls the party? And it is more than a little ironic that Smith whines about social media having a disproportionate influence, as it is his faction that has a privileged social media platform while hundreds of feminists and free speech advocates are banned every day.

National assemblies can be organized online, as can conferences – there is one scheduled for January – so this is a poor excuse for Smith failing to produce a single strategy paper in his year as Policy Development Convener.

But that last line is breathtakingly bold – those 130 moves were everything thrown straight in the trash can, replaced by six woolly marshmallow resolutions, drafted by anyone who does not allow significant opposition or debate, dutifully stamped after a process that was so controlled and orchestrated that it would have embarrassed the North Korean parliament.

This passage is almost as hypocritical. The whole problem is that policies like gender reform and the hate crime law were NOT discussed and agreed upon. Gender reform is due to be publicly consulted, but the leadership group that Smith is a member of has repeatedly and publicly made it clear that it wants to push reforms regardless of what is in the consultation. According to the minister responsible, the sole purpose of the “consultation” is to induce the opponents to submit.

And the hits keep coming back. Joanna Cherry went public with her concerns as numerous attempts to address her internally have been completely ignored. She has faced public attacks and ill-treatment by dozens of party members in clear breach of party rules, and none of this has been condemned, let alone acted, by her leader.

But here Smith has the brass neck to do it all over again, grumbling about “unity” and “loyalty,” and implicitly attacking ordinary members of the SNP who had the shameful audacity to democratically vote for the candidate they were supported a free choice.

Smith’s petted lip sticks out so far it’s almost 3D. However, whether you agree with “Plan B” or not, it is embarrassing to say that it “hardly exists”. It’s an enormously simple and clear plan that can be slotted into a single tweet:

“We believe that the Scottish people are sovereign and we hereby announce our intention to declare Scotland independent and to submit that intention to the will of the people for approval in these elections. “

It is a strategy that countless nations have already successfully used to achieve independence, and in any case, complaining about the “real world” viability when the only alternative you offer is a bit rich. “Boris Johnson will give in to us morally -decency reasons”.

Aside from the really amazing irony of Alyn Smith berating anyone for narcissism and ego, this passage is strange. What should Alex Salmond’s “apologists” apologize for? Alex Salmond is an innocent man who has been cleared of all charges by a judge and a jury of his colleagues, most of whom are women. How is there a conflict between him and the defenders of women’s rights? He’s not the one right now trying to take away the safe rooms that women have struggled for decades or lock them up with rapists.

After the faction-hating Smith beat up the humble women, he’s now turning on the pesky leftists, namely the Scottish Currency Group, who have tried – despite the limitations of COVID that seem to have somehow managed to make it impossible for Smith to one To do political work for years – finding credible currency options to fill the void that the Growth Commission’s report left in this area (which was mercilessly and quite correctly exploited by the Unionists over the next two and a half years) and scoffs at them as “magic bean” proponents.

(An oddly croaking way of describing the idea that Scotland has its own currency, like almost every normal nation on the planet does.)

Who is the “we” here? If Smith claims that the SNP is a unitary party and that he does not want any part of fractionism, who exactly is he going to organize against? Is he claiming that the NEC, elected by party members, somehow does not represent the party and that only he and his allies are the true bearers of the SNP flame?

It’s an interesting line from a “team player” that we give.

The awakened cabal that the SNP captured and drove over the views of ordinary membership seems to be still in the rejection phase about this week’s events and unable to understand what happened or how reasonable Adults deal with it.

(We note by the way that, unlike last year, the First Minister could not bring herself to congratulate the newly elected NEC.)

For the sake of movement, we hope that changes soon, but until the snake’s head is also removed, we don’t hold our breath.

The greatest lie ever told

The flexible interpretation of international law by the British

Trump Self destroys and threatens the Supreme Court docket