We normally don’t like to devote a lot of time to things that have been more than adequately covered elsewhere in the media. B. have read the internal market accounts. Unlike others, we don’t see much point in using our limited human resources to tell people things they already know and agree with.

But we’re going to make an exception for this closest thing, which Susan Dalgety already handled pretty well in last week’s Scotsman, because (a) many of our readers will reasonably have an instinctive negative reaction to either printed in Scotsman or anything that Susan did Dalgety, and (b) a number of people have asked us to compound this problem because it is so important and so terrible.

A bill is currently being passed in the Scottish Parliament to allow raped individuals – the vast majority of whom are women – to conduct a forensic investigation prior to police operations. This is clearly a very good thing as the thought of having such an investigation conducted in a police station prevents many victims from reporting the crime.

The Health and Sports Committee that ran the bill through the legislative process heard – also from one of the Scottish Government’s pet organizations, Rape Crisis Scotland – that The main concern of women who had been raped was access to a doctor to conduct the investigation. 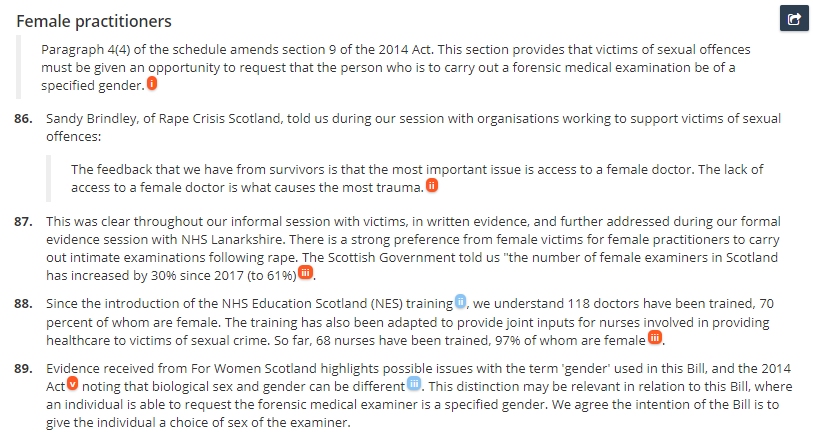 The draft law, however, was intended to allow victims only to indicate the “gender” of the doctor and not the gender, which the Committee found not to be problematic. It was therefore recommended that the wording of the draft law be changed to “gender”.

But the Scottish government refuses to make the change because of Trans Feelz.

There is no doubt that the failure to do so will result in more victims refusing to report a rape because they fear a second trauma if they have a man conduct such an intimate examination at such a stressful time. However, the Scottish government is so obsessed with “diversity” and “inclusion” that it doesn’t even listen to its own committee or quangos.

Johann Lamont – someone else Wings readers understandably can hardly hear, another reason we were asked to get the message across to our own audience – has proposed a six-word amendment when the bill goes to Parliament this Thursday: For the word gender, replace gender. It is currently expected that SNP MSPs will vote against the change without guaranteeing that it will fail.

If they do so, according to this website, it will be the most shameful and shameful act in the history of the Scottish Parliament since it was dissolved in 1999.

The weaseled response on behalf of the Cabinet Secretary for Health is intended to reassure women that exemptions from the Equal Opportunities Act for employing trans people in such sensitive roles continue to apply. However, if it does, the amendment cannot do any potential harm, which in any case only serves as a solid guarantee of the intended intent and (in particular) removes women’s fears of reporting it horribly and under criminal law.

We ask readers to contact their MSPs and request that they support the change request. If you don’t, you will fail on people who have just had one of the worst experiences anyone can imagine, all for a few points. Belief in politics is already at an all-time low. Let us all do what we can to avoid horrific new lows.

So who’s going to think of the poor old South Armagh cattle smugglers?