Drew Hendry received a lot of praise from Yes supporters a few days ago for confiscating the Mace in the Commons. It is never easy to speak in the chamber and it is indeed challenging to do so, given the hostility of the speaker.

The institution of Parliament is by nature designed to be controlled by the British establishment. Not only are all sides uniformly hostile, but the staff and officials who are usually so polite and respectful turn you on. So it was an intimidating atmosphere in which he acted and it couldn’t have been easy.

But the idea that Scottish MPs should routinely suffer the contempt and ridicule of their nation and people is well past its expiration date. Much of the shouted vitriol would not be recommended anywhere else, and just because they are supposedly honorary members who act in this way does not warrant it. There comes a time when words are not enough.

Then there are the laws that have been passed case the Single Market Act – which is very damaging to Scotland and its people. SNP MPs are committed to defending Scottish interests, so the idea that they should accept laws doing such damage to Scotland in the first place is obviously absurd. It is the duty of those elected by the SNP to speak up and take action that reflects the anger and dangers facing Scottish democracy.

However, English votes for English law, Brexit and now the Single Market Act have shown that attacks on Scottish interests in Westminster are not a deviation, but part of a pattern that is undermining our country and the elected parliament. It has been some time since the SNP group stepped out in disgust to spread public support, but the situation has worsened and the crisis in Scottish democracy has worsened. 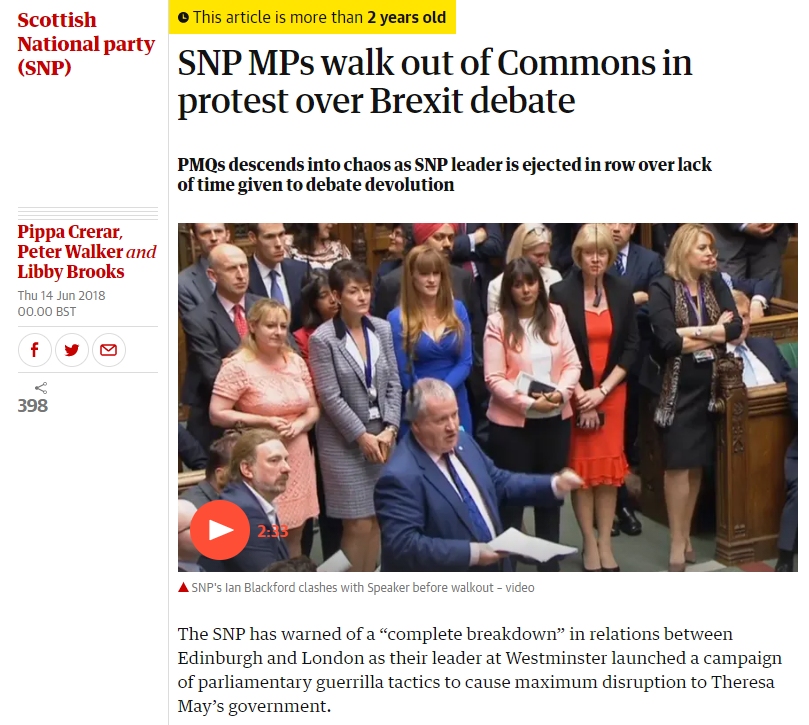 So Drew Hendry deserves all the praise he has received not only from the grassroots but also from high-ranking party figures. However, this latter support itself raises questions. If it is right for a single elected Member to speak up and take part in disturbing Parliament, why shouldn’t the group do so, as has actually been done before? What happened to the promised “campaign of guerrilla tactics”?

From a moral point of view of the actor, individual acts are commendable and important, but especially for the cause. Failure to pay survey tax has been viewed by many as a moral duty due to its inherent injustice and its future impact on communities. But it was a mass campaign that ultimately resulted in her and Thatcher being removed. There have been countless cases of legitimate acts by individuals multiplied by collective acts, and it is this unity and coordination that brings success.

So this should certainly be the case if Parliament is disturbed. Individual actions are commendable, but collective and, above all, coordinated actions are more likely to have an impact. Isn’t it time to prepare all members for what they should do instead of just congratulating one member on what they did? Even those Members who least support such actions have spoken about disrupting Parliament if a resolution under Section 30 is rejected after the Holyrood elections.

But why wait? Scotland’s plight is worsening day by day and the incompetence of Westminster rule is growing. The alleged mother of the parliaments paused before the accident and called for a call back. The sins of the Tory government are approved or unchallenged by the Labor opposition. The time has come to change parliamentary tactics, albeit constrained by the almost inevitable inevitability of virtual parliament in the first weeks – if not months – of next year. Action must begin before and not after the Holyrood elections.

Proposals to refuse to sit on public bill committees go nowhere near enough. It’s too little too late. Steps must be taken to show Scotland’s anger (and not just that of the SNP voters) at the contempt with which it is being treated.

When the Scottish Affairs Committee presented a report on drug policy in the last parliament, it was ignored by the British government. Instead, after gaining a majority in 2019 – despite another widespread rejection in Scotland – the Tories have been crammed with English MPs. This treats Scottish MPs with contempt, but it is the Scots who die of drug addiction in our communities. In any case, it is not the job of the SNP MPs to run the British state, least of all when it is actively undermining our own country.

It is therefore time that the parliamentary tactics of the SNP changed and parliamentarism ended. What this will mean has to be discussed and planned, but action has to be taken. Righteous anger does not save victims of drug addiction, virtuous outrage did not stop Brexit or mitigate its effects, and speech of honor does not protect our country or its democracy.

Scotland needs MPs who act in its best interests, not just speak, and that must be done through collective, not just individual, action.

Trump thought 60,000 individuals would present up in Tulsa, however solely 6,000