We were reminded this week of the amount of stick we got when we wrote these words almost five years ago, right after the 2016 Holyrood elections:

(The rest of our post-game analysis wasn’t overly shoddy, either.)

But readers, we have to grudgingly admit: we’re just almost always right.

Because we are really shocked that the malicious Holyrood Committee of Inquiry (including ours) somehow delivered a far worse report on the government of Nicola Sturgeon than the man who – unlike the committee – was actually (almost) allowed to see. all evidence of its corruption and conspiracy.

The relentless blind party loyalty of the four SNP members of the committee, as well as Andy Wightman’s unwillingness to take the difficult final step and vote for what he clearly knows to be true, put the report just below what it takes to get rid of it Threshold held by the First Minister, and that, there is no doubt, is a devastating tragedy for both the Yes Movement and Scotland, which calls into question any prospect of independence for at least another five years.

You can quote us again on this in 2026, because there is not the slightest glimmer of hope for a second independence referendum while Nicola Sturgeon lives in Bute House, and we are going to put tons of money you like behind that claim. Contact us with a bet for the amount you choose and we will accept it.

But the committee deserves some credit for still telling the truth to anyone willing to read between the lines. Let’s go over some highlights.

It is clear from paragraph 235 that the committee knows that the new harassment system was designed primarily to persecute one man and one man alone, but cannot have the collective courage to actually say so:

In particular in connection with paragraph 293:

Let’s dwell a few moments on the word “amazing” in paragraph 314:

Because it is also a fair word to describe the prospect of Permanent Secretary Leslie Evans surviving publication of this report in a sane world: 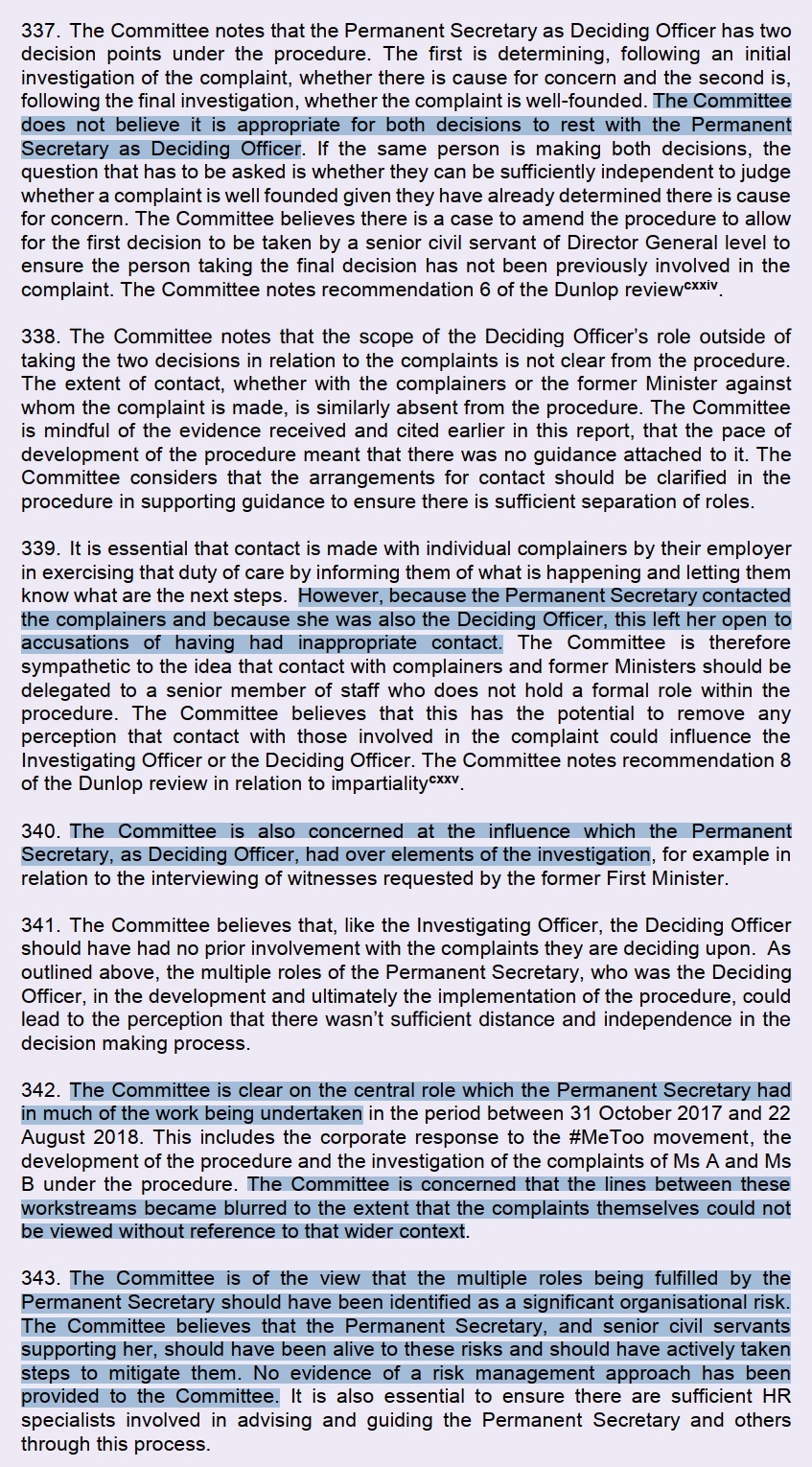 But we should also note this well-buried mine, which appears to be the committee’s only direct attempt, in 187 pages, to learn the truth about where the money is staying:

Paragraph 366 is shamefully weak on whether to pressurize applicants’ wishes to involve the police, but it may be overlooked as Laura Dunlop’s review of the process has already recommended that it be clear and clear to them to grant a clear veto.

However, paragraphs 377-381 are a clear and unequivocal endorsement of the fact that the trial drafted by Leslie Evans and her team was an entire turkey – an inherently unfair trial that specifically failed to seek justice for the individual accused. 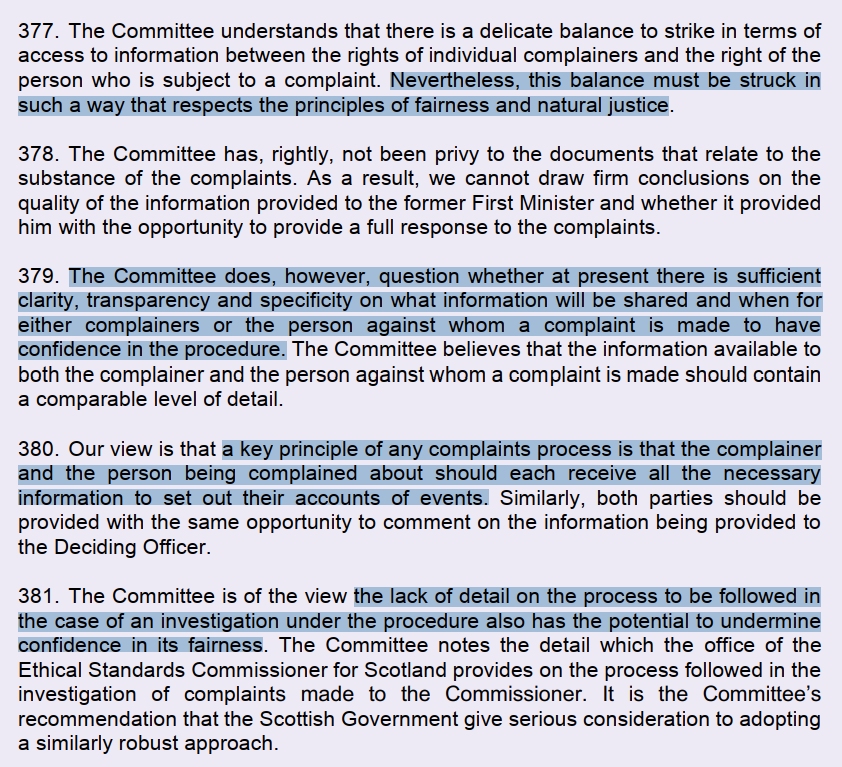 Paragraphs 408-414 will again invite readers to wonder why Leslie Evans was not silently handed a bottle of whiskey and a revolver after the shambolic collapse of the judicial review, but instead received a lucrative two-year contract extension from Nicola Sturgeon when whether or not she’s performance was not only acceptable but, in some ways, actively meritorious.

In what is perhaps the most articulate section of the report, the Committee makes it clear that Evans is seriously failing not only the complainants but also Alex Salmond and causing serious harm to all those concerned, for whom she alone had the primary duty of supervision. 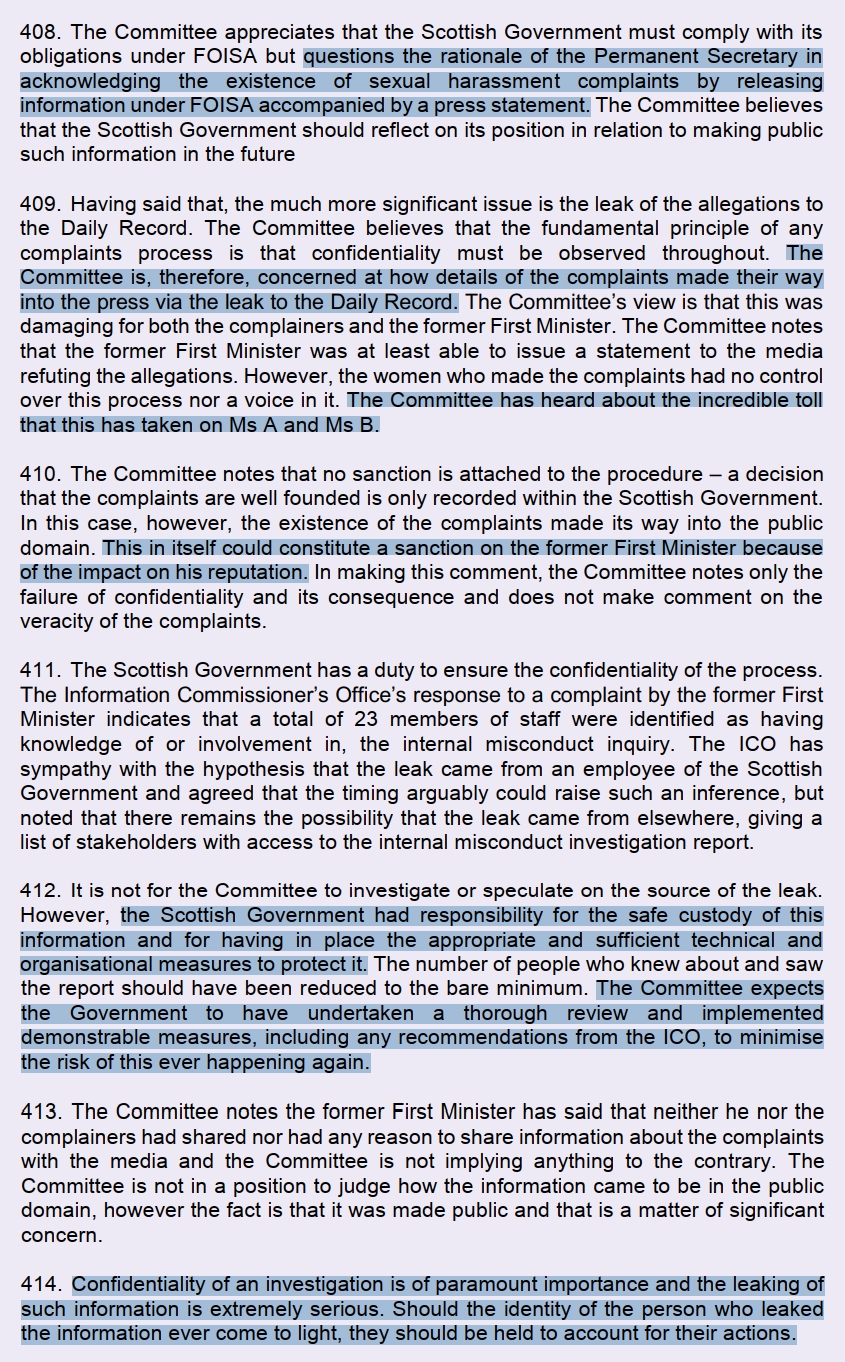 (Previously, we had seen the Scottish Government consistently cynical insistence on primarily concerned with the welfare of the complainants, who were bitterly gunned down in flames by the complainants themselves.)

Paragraphs 526-528, meanwhile, clearly affirmed the complete truthfulness of David Davis’ statements in the House of Commons last week, and thus the complete, knowing dishonesty of the First Minister’s later attack on him at FMQs. 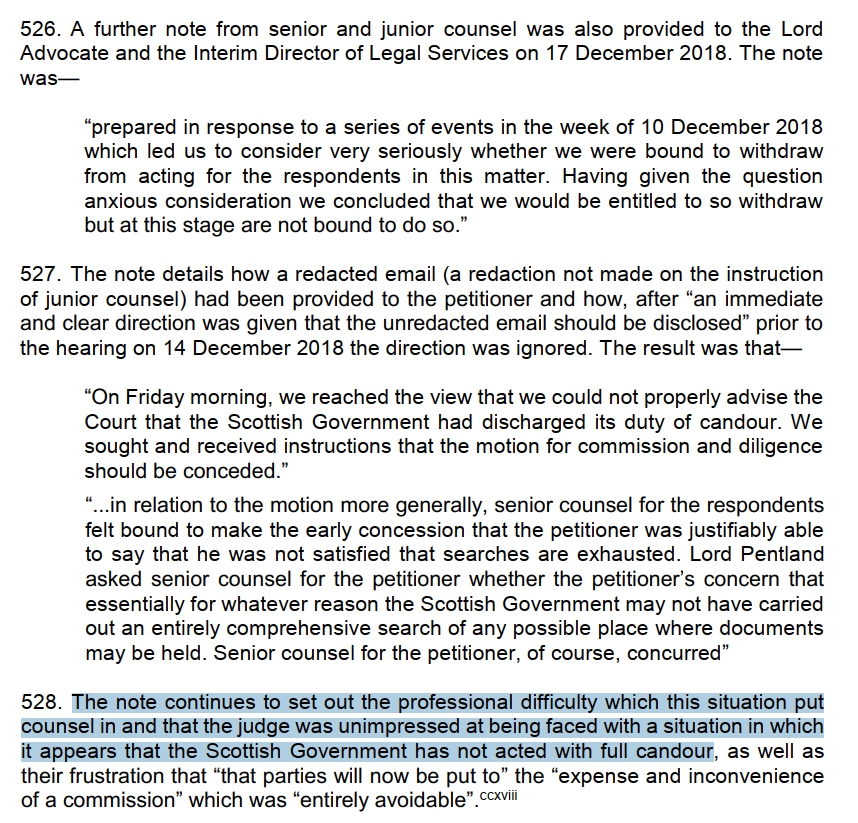 But it is paragraphs 598 and 599 that should be the coup de grace for both Leslie Evans and Nicola Sturgeon. They represent the report’s strongest criticism of anyone:

Evans gets it right down the nape of his neck, which the committee notices “[her] An individual failure is just as important as the general failure of a company described above. ”

But while most of the worst specific flaws are clearly on Leslie Evans’ door, she is not responsible or responsible for the Scottish government. The first minister is.

Needless to say, readers need not be reminded that in fact not a single person has been “held accountable” in any way for a single moment of this fiasco. In fact, most of those in charge have been rewarded with longer contracts and / or high pay rises. 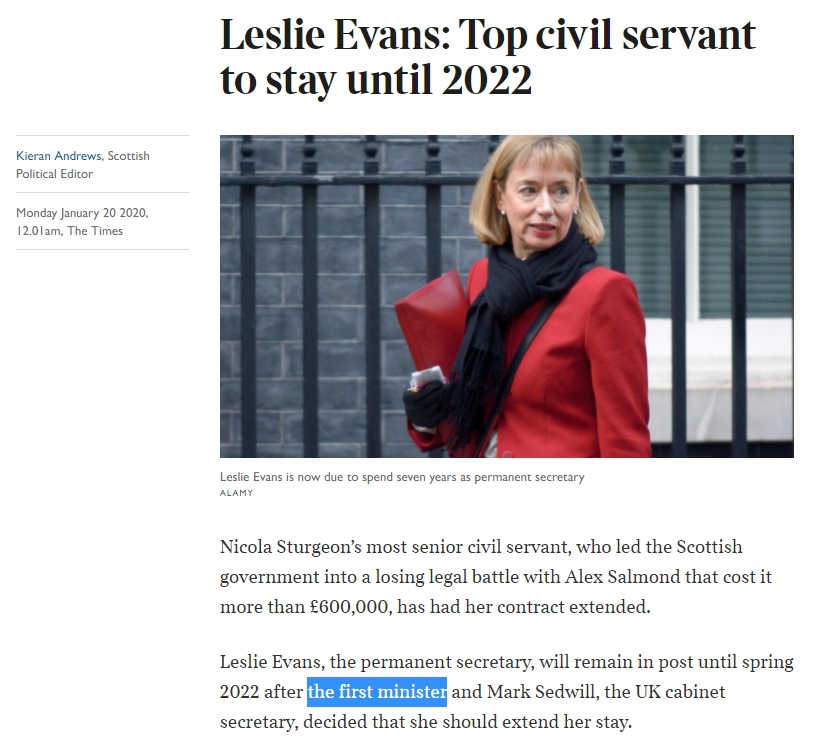 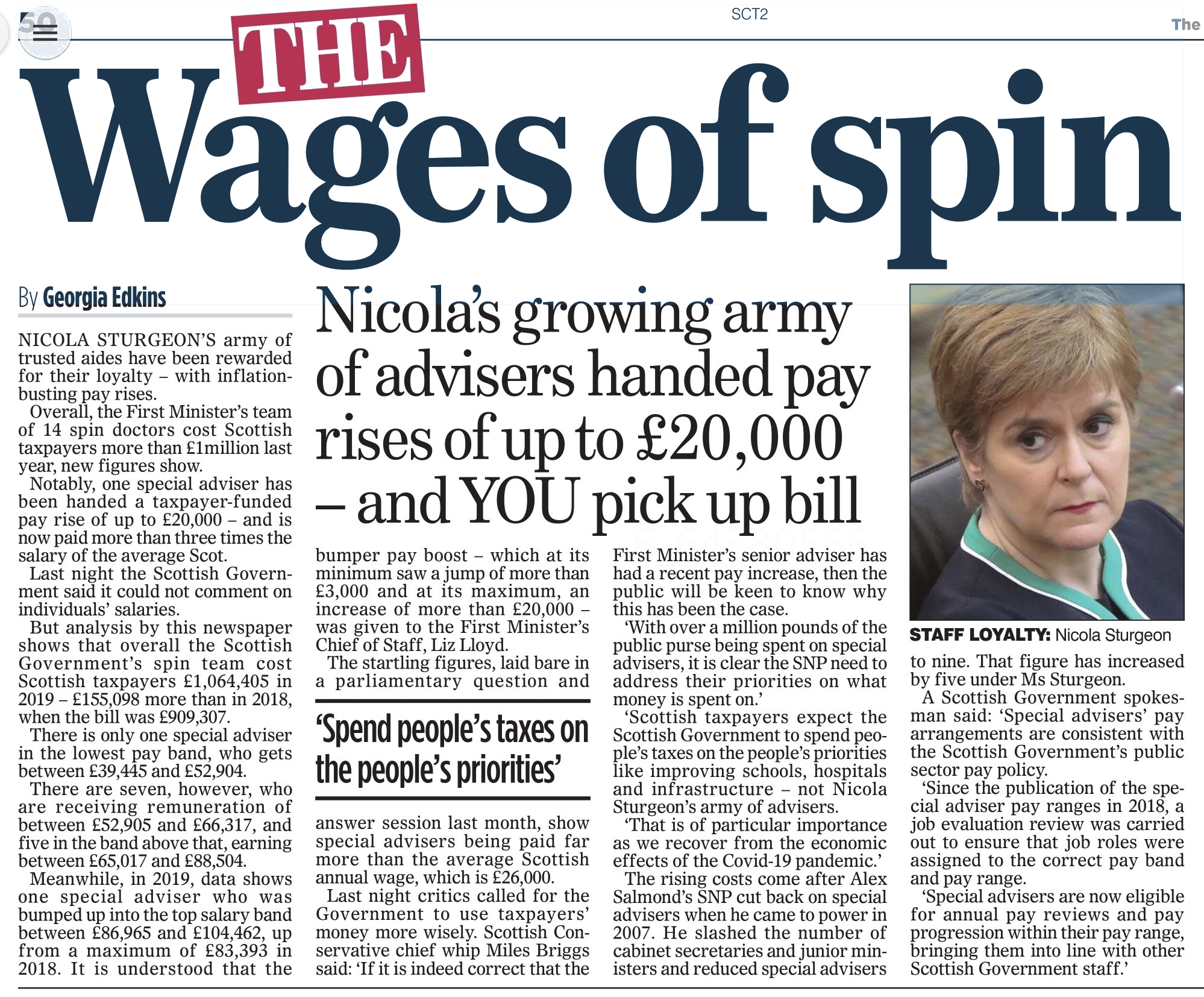 It remains to be seen whether this situation persists.

The report ends bizarrely with the committee and James Hamilton makes a bizarre impression of the Chuckle Brothers shouting “to me … to you”. 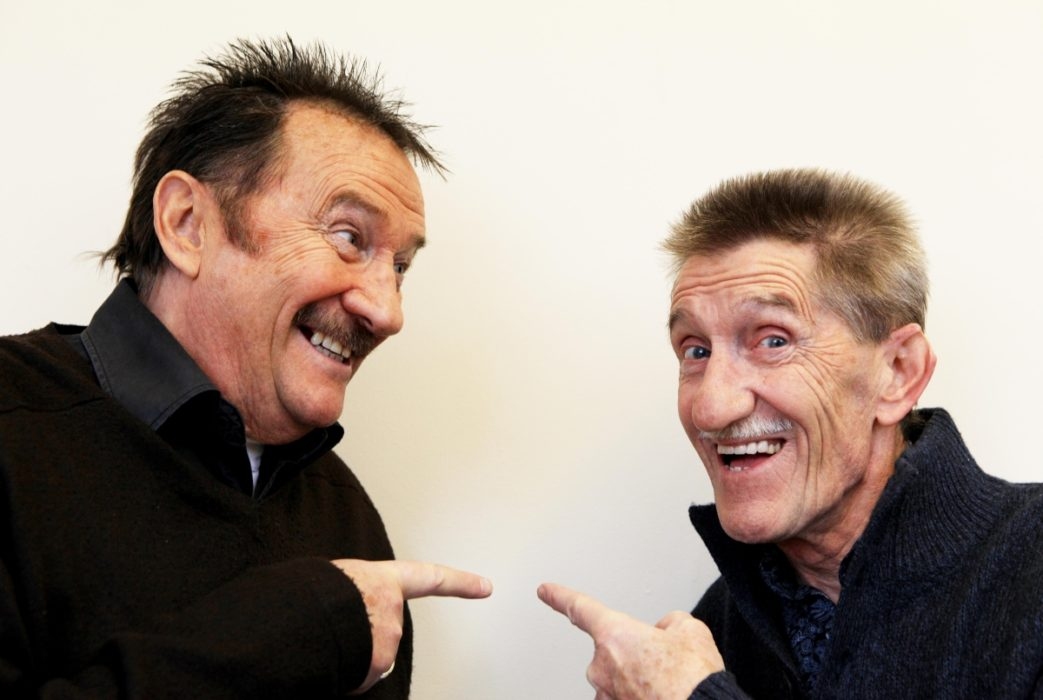 Where Hamilton said yesterday, “It’s for the Scottish Parliament [ie the committee] to decide whether they have actually been misled “:

… The committee throws the hot potato right back at him:

But in the end, both sides bottle it up. The committee, as leaked over the weekend, concludes that it was misled by the First Minister, but Chickens did not come to the key (and logically inevitable) conclusion that it was deliberate, clear because Andy Wightman lacked the courage to sign up to this point.

This failure, of course, was not his only, but the presence of four spineless SNP lap dogs on the committee, dealing only with loyalty to Nicola Sturgeon. How else are we supposed to explain the last paragraph?

Let’s take a moment to think about what that means. The most important finding of the committee, that it “may not have sufficient powers to bring the executive to justice”, was rejected by the four SNP members.

In other words, they actually WANT the Scottish Parliament to be too weak to hold the Scottish Government accountable and to have fewer and weaker powers than the opposition and Westminster Tory MP David Davis have asked for .

The pathetic denial of more powers to Holyrood by SNP MSPs in the event that those powers might impose actual democratic accountability on their own administration is in some ways the most illuminating and shameful aspect of the whole matter.

It’s an almost open admission that Nicola Sturgeon only survived by using all means at her disposal to avoid due scrutiny and by taking advantage of the weaknesses that the unionists who developed her in Holyroods Have built in power structures.

In addition, they show that a Prime Minister feels very comfortable within the boundaries and limits of decentralization and is deeply unwilling to give significantly more power to the Scottish Parliament because of the difficult responsibilities that come with it.

And that is a trait that readers may want to ponder honestly and soberly when considering the likelihood of ever gaining independence.

Could a peace plan be part of the unfinished business of reconciliation?

The public sector is vital to Northern Ireland, but it needs new blood and extra liveliness …